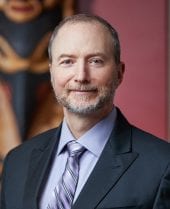 Ed Goodman has been involved with Indian issues for more than 35 years, beginning with graduate-school volunteer work on Indian land-rights protection. Moved by the commitment of tribal leaders and their causes, Ed entered law school to help Indian communities. He began his Indian law practice in 1989 and served as a staff attorney, and later as director of litigation for the Native American Program of Oregon Legal Services. Ed joined Hobbs Straus in 2001 and became partner in 2003. In December 2011 he was named the first “Lawyer of the Year” by the National American Indian Housing Council, a national organization with 271 members representing 463 tribes and housing organizations across the United States.

Ed’s housing work includes matters under the Native American Housing and Self-Determination Act (NAHASDA), landlord-tenant issues, and personnel and administrative situations. He represents tribal housing departments and Tribally Designated Housing Entities (TDHEs), and participated in negotiated rule-making for the NAHASDA. Ed helped tribes and TDHEs address methamphetamine use and manufacturing on their properties.

Ed has litigated on behalf of tribes in state, federal and tribal courts, as well as in various administrative forums. He successfully litigated Klamath Tribes v. United States of America, to protect fish and game habitat as part of tribal treaty rights to hunt and fish. Ed helped draft constitutions, ordinances, by-laws, and administrative regulations for tribal governments. He also assisted two restored Oregon tribes in re-establishing their tribal court systems and exercising jurisdiction over tribal lands and members. He is currently a part-time judge for the Confederated Tribes of Siletz Indians.

Ed served as an adjunct professor at the Northwestern School of Law of Lewis & Clark College. He enjoys books on politics and history, playing guitar, and canoeing and hiking with his family.