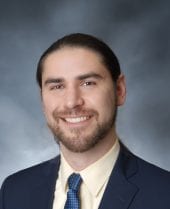 Hunter Cox joined Hobbs Straus as an associate in June 2018. Hunter is a citizen of the Prairie Band Potawatomi Nation, and a Cherokee Nation descendant. He is a graduate of the University of Michigan Law School, the Gerald R. Ford School of Public Policy, and Dartmouth College. Hunter is admitted to practice law in New York and the District of Columbia.

During law school, Hunter was active in Native American organizations and public interest work. He clerked for the Native American Rights Fund in Boulder, Colorado, working on everything from water rights to voter rights. He served as the Treasurer and then President of the National Native American Law Students Association (NNALSA), a 501(c)(3) non-profit that promotes the development of Indian Law and advocates for Native American students and their allies in law schools across the country. He also served as Co-Chair of the Michigan Law’s NALSA, hosting then Assistant-Secretary of Indian Affairs Kevin Washburn at the Michigan’s Indian Law Day, and creating the Michigan NALSA Spring Break Volunteer Program, where students volunteered at DNA Legal Services on the Navajo Nation. Finally, he served on the National Native American Bar Association’s (NNABA) Board of Directors during his last year of law school.

Hunter’s public interest work spans civil and criminal matters. He provided direct client services in housing and public benefits matters at the Legal Services of South Central Michigan (LSSCM). While working as a student attorney for the Michigan Innocence Clinic, he helped investigate and litigate factual innocence claims in order to exonerate wrongfully convicted clients. After law school, he obtained asylum for a journalist and political activist in the Democratic Republic of the Congo who escaped persecution at the hands of the ruling party’s military forces.

Prior to law school, Hunter worked on the Hill both as an intern for the Senate Committee on Indian Affairs under Senator Byron Dorgan, and for Senator Mark Udall through the Udall Foundation’s Congressional Internship Program.

Outside the office, Hunter enjoys spending time with his fiancée, Sami, going on runs, bike rides or just about any outdoor activity, reading and going to concerts.