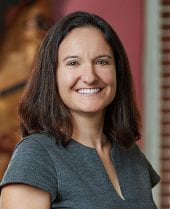 Dawn Winalski joined the Hobbs Straus Portland office in July 2018. Prior to joining Hobbs Straus, Dawn served as an Assistant Borough Attorney with the North Slope Borough in Utqiaġvik (formerly Barrow), Alaska. Living in the Arctic, she provided direct client counseling to the Mayor, Assembly and Departments of a county-level government on a wide variety of topics in municipal law. As the lead attorney on environmental matters, she worked closely with scientists, regulators and subsistence hunters on the analysis of onshore and offshore oil & gas projects under the National Environmental Policy Act and other statutes. She participated in endangered species litigation related to Bearded Seals, Ringed Seals and polar bear critical habitat, and worked to protect the traditional and cultural rights of Alaska Natives to hunt for subsistence purposes.

Before moving to Alaska, Dawn served as a Judicial Clerk for Judge Matarazzo at the Multnomah County Circuit Court in Oregon. Dawn is a 2009 graduate of the University of Oregon School of Law. She clerked at the U.S. Environmental Protection Agency Office of General Counsel, and the U.S. Department of Justice Environment and Natural Resources Section. During law school, she worked as a Research Assistant for Professor Adell Amos and Professor Mary Wood, served as a Co-Director for the 2008 Public Interest Environmental Law Conference, and was an Associate Editor for Oregon Law Review.

Cleaner Water in China? The Implications of the Amendments to China's Law on the Prevention and Control of Water Pollution, 24 J. Envtl. Law and Litigation 181 (2009)